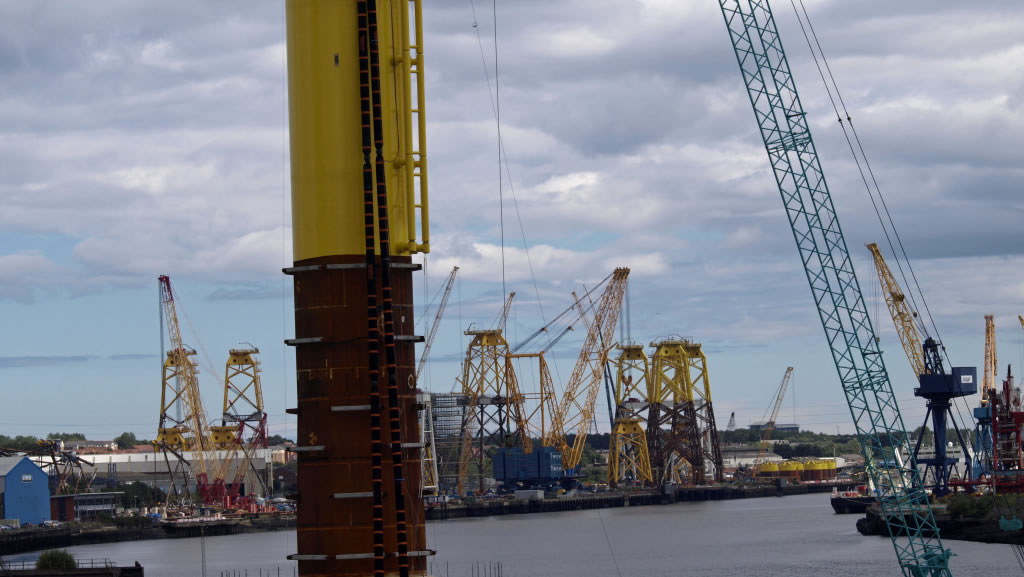 There’s some interesting views on the River Tyne these days. At the old Neptune Dry Dock in Wallsend, Royal BAM Group have been building five 60m high Gravity Based Foundations (GBF’s) for the Blyth Offshore Demonstrator Wind Farm, whilst further down the River, at the old Hadrian Yard now operated by Smulders UK, the huge jackets for the Beatrice Offshore Wind Farm are being assembled, leading local commentators to compare the landscape to the alien invaders of War of the Worlds.

In truth, however, both projects are part of resurgence in offshore activity that, whilst differing from the massive Oil and Gas topside projects of previous years or even earlier shipbuilding for which the North East region was justly famous, offers a real boost in economic activity.

Offshore wind is now a huge industry, providing the UK and Europe with an increasing proportion of its electrical power needs from green, renewable resources. The UK generates more electricity from offshore wind than any other country – the sector currently meets 5% of annual demand and this is expected to grow to over 10% by 2020. We now have 30 Offshore Wind Farms (OWF’s) generating over 5.1 GW of operational capacity with a further 4.5 GW under construction (source: Crown Estate).

Moreover, as the cost continues to reduce – the Offshore Wind Programme Board’s report of 2016 estimates the cost has fallen 32% from £142.00 per MWh in 2013 to £97.00 per MWh now – the proportion is expected to further increase, despite the fall in rival carbon-based fuel prices.

For Tyneside, with its tradition of offshore and marine-based skills, this could prove a huge boom. Located equidistant from the main areas of OWF activity in both Scotland and East Anglia, the region’s engineering skill base and physical assets are being revitalised by this new offshore industry.

And what imaginative projects they are! The five GBF’s currently being floated out prior to their tow-out to Blyth are each made up of more than 1,800 cubic metres of concrete and will weigh over 15,000 tonnes when fully installed on the seabed for EDF’s Blyth Offshore Wind Demonstration Project. The development has consent for up to 15 turbines which will demonstrate and test the very latest technology, not only in structures including self-floating and these first five submersible GBFs (which alone will generate 41.5MW), but also in turbine design. The project is already employing over 200 people at both the Neptune Yard and at the onshore substation under construction on the former Blyth Power Station site.

SSE’s Beatrice Offshore Wind Farm is a huge undertaking of 84 individual turbines capable of generating 7MW of power each and having a 154m diameter rotor, which will cover an area of some 131 sq. kms in the Outer Moray Firth, ironically adjacent to the now redundant Beatrice oil platform, decommissioning plans for which are under consideration. Whilst the Beatrice project is underway, Smulders are already gearing up for the manufacture of pioneering suction bucket foundations for Vattenfall’s European Offshore Wind Deployment Centre (EOWDC) which will create another 105 jobs.

So, take a trip down the River or drive down either side to see the latest phase of industrial activity that ensures Tyneside remains synonymous with offshore innovation and expertise.